Ask any seasoned gardener and they will tell you stories of their watering woes. "We never had to worry about water shortages before, watering only on even or odd numbered days, or any of this! It seems like we could depend more on the spring rains back then too, but when it was dry we simply got out the hose and watered our garden. Nowadays, we have to sneak out at night to water like we're criminals!"

Lavandula a. 'Munstead' is often used as edging along pathways because it can handle the reflected heat well. This variety does double duty: it is heat and drought tolerant but it also considered to be the most cold hardy cultivar available.

While some of these seasoned gardeners continue the uphill battle of keeping their gardens watered, many gardeners are now choosing to work with the changing climate rather than fight it. They are replacing water-hungry annuals with drought tolerant perennials that will thrive with little attention in their landscape for many years to come. With such a wide selection of drought tolerant plants now available in garden centers nationwide, gardeners can choose from an array of beautiful flowering plants in a rainbow of colors and sizes.

Be sure to check out the extensive list of drought tolerant perennials below. Keep in mind that some are more drought tolerant than others. For detailed information on each perennial listed below, check out our Perennial Library on www.perennialresource.com.

The words "drought tolerant" often conjure up images of barrel cacti and aloe plants growing in the desert. While these plants are certainly drought tolerant, there are many others to consider. Often, drought tolerant plants have a unique leaf structure such as:

Many drought tolerant plants also have deep roots that seek moisture well below the soil surface. Some send up masses of fine feeder roots to collect available moisture at the surface and send it down below to the main roots. 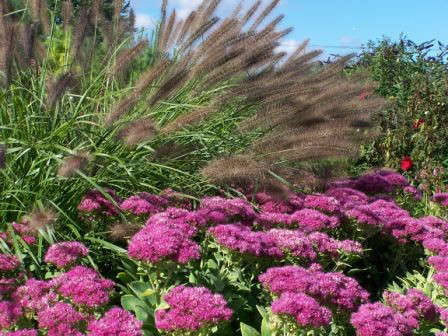 Pennisetum a. 'Red Head' and Sedum s. 'Neon' make excellent companions because they both share the cultural requirements: full sun and well-drained soil. As an added bonus, they both bloom in late summer, putting on an excellent show in the landscape!

Most drought tolerant plants perform best in hot, dry climates in full sun and well-drained soil. The most obvious form of this climate is desert, but you might not realize that parts of the average homeowner's yard which are perpetually dry are ideal places to grow drought tolerant plants. They can be used quite effectively where it is difficult to water or where water evaporates quickly such as on sunny slopes or next to pavement. It's best to group drought tolerant plants together in the landscape so they're easier to manage.

I need specific cultural information about drought tolerant plants. Where can I get it?

www.perennialresource.com. A detailed plant record for every perennial listed below can be found on our consumer website. Here are some general guidelines for the culture of drought tolerant plants. 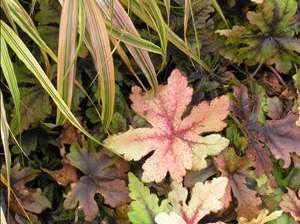 Here in Michigan, the leaves on the trees have offered up their last show of color for the year and have begun to fall, the first frost appeared early one morning last week, and the birds are gathering, making plans to fly south for the winter.